Our Lives as Students with Special Needs in Somalia 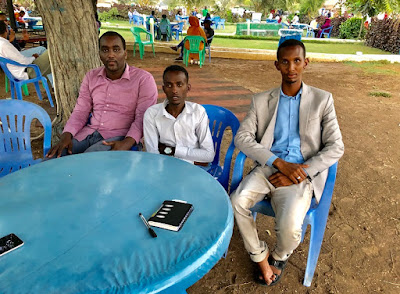 Most of us take mobility for granted because we either don’t know how it feels to be physically challenged or we are not aware that an increasing number of disabled people have difficulty with activities that are part of our daily life. Life can be tough and traumatic for those whom disability strikes in early childhood, especially in a war-torn country like Somalia, and a catastrophe for those who cannot cope with such an eventuality. Featured in this article are stories of three extraordinary, physically challenged young men who, despite the unbearable difficulties, managed to achieve their dreams. Each one of them has different and unique story to tell.


During their convocation ceremony, their photos went viral on social media and because of that they received messages of congratulations and solidarity from Somalis around the world. I decided to meet them in person and write their stories in their own words. Like many other people affected by the civil war in Somalia, life has been very hard for them. They came of age in a country where people with disabilities are often discriminated against and ill-treated.


Farah Hassan Muse’s story: “a week later, I was diagnosed with the disease”


Farah Hassan Muse is a 24 year old teacher at Dalsan Primary and secondary School. Born in Beletweyne, he contracted polio at the age of 3. “I had just turned 3. I caught the virus from a neighborhood friend and then I was taken to Mogadishu and admitted to hospital with polio.”A week later I was diagnosed with the disease and I could not walk independently.” 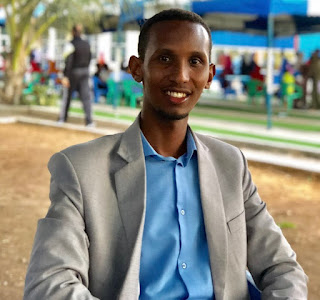 Like many other children at that time, Farah was sent by his family to his paternal aunt’s house in Mogadishu, a place where he still lives. Farah recalls how his aunt took care of him, the unconditional love and support she gave him. “My aunt Hakima is everything to me.” He says “She has always been there for me through thick and thin. I never felt I was away from home, I never felt I was far away from my family. She is my family indeed.”


Farah studied Quran at nearby Madrassa in his neighborhood, Waberi, went primary school in the same area and finished high school in 2012. He then continued to pursue his degree studies at SIMAD University majoring in Banking and Finance. On 30th January 2018, he was among 690 students who wore the graduation gowns and celebrated the day he had waited for so long. His graduation was a remarkable lifetime achievement for him and for his family.

Ismail Rage’s Story: “It is very challenging when the neighborhood is sandy knowing that the only option you have is to crawl to reach the school.” 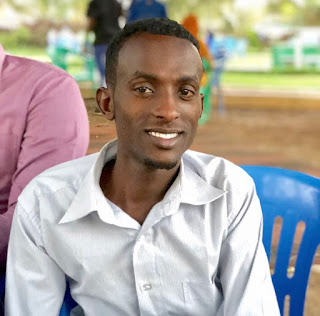 Ismail Rage is another disabled student who has just received his bachelor’s degree in banking and finance from SIMAD University. Like Farah, Ismail developed polio in early childhood, which left him with paralysis in his legs. The only way Ismail can move around is to crawl or drive his disability motorbike. Ismail’s picture in his graduation gown and crawling to receive his certificate was captured in social media and even went viral for weeks. His story was published in several international online websites, including VOA.

Born in Wardhigely district, Ismail was raised in Gubta neighborhood. He was always an avid reader and passionate about education. At a tender age, he was sent to private school. It was far from his house, so he had to crawl there every day. “It is very challenging when every other student arrives on time, the class starts on time but you are the only one late every morning. It is very challenging when the neighborhood is sandy, knowing that the only option you have is to crawl to reach the school,” he said with emotion welling up in his voice.


But being disabled never limited Ismail and never stopped him from achieving his dreams. “My dream was to obtain my bachelor degree one day and make my parents feel proud of me. I wanted them to know what their disabled son has achieved despite the physical challenges.  But more importantly, my biggest dream was to inspire other fellow disabled brothers and sisters not to give up, to encourage them that being disabled and growing up in conflict zone doesn’t stop you from realizing your potential. It just widens your limits.” In November 2017, Ismail was employed by SIMAD University as finance assistance. As of 1st February 2018, he started working with Premier Bank at their customer service desk. Ismael’s dreams are far from over. He is planning to purse his master degree in finance and banking in Malaysia later this year.  Thanks to former president Hassan Sheikh Mohamed, who is the founding father of SIMAD University and who promised a full sponsorship for Ismail’s post-graduate studies.


Abdirashid’s story is entirely different and touching. Before 2013, life was normal for him. He travelled across the country and beyond, walked like any other person and played football. But on June 10, 2013 everything in his life changed. An incident of that day cost him both his legs.


It was a beautiful day, Abdirashid was riding a car with his grandfather, who was member of the parliament. Around 10:30 AM that morning, a bomb planted underneath the car exploded in Hamarweyne. Not knowing what had happened, Abdirashid crawled to nearby shop and lost consciousness. He came to in the Intensive Care Unit (ICU) of Digfer Hospital. 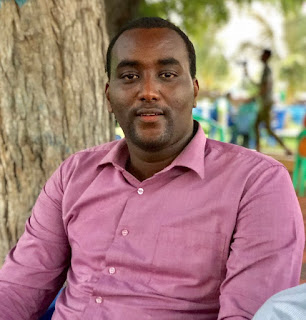 “I remember I was in the first semester break of Public Administration at SIMAD University, but when this happened to me I almost gave up my life. Losing key limbs of your body is difficult. You realize that from this day forward things will change, even your name could change as Somalis are known for giving nicknames to people based on their physical appearance. Thanks to my friends, family members and classmates who stood by me all the time and showed me great solidarity. They all have been kind and very supportive at a time I desperately needed them,” he said. The university administration were kind. They even allowed him to continue his courses while in hospital. “Lecturers used to visit me at the hospital and used to give me the lessons, the whole semester two and three I was in the hospital. I made sure I never missed a test,” he added. Abdirashid was taken to Turkey and spent one month in hospital for further medical attention. When he returned to Somalia, he immediately resumed his classes while using walking sticks.


Since the breakout of civil war in Somalia thousands of innocent civilians have been killed, millions forced to flee the country and thousand others have been disabled due to injuries from bombs, landmines and gunshots. People with disabilities in Somalia face excruciating challenges, starting with social discrimination, such as naming them for their disability characteristics. They are largely excluded from society and often don’t have the support of family or community protection. Lack of accessibility to public places makes their situation more tragic. Their lived reality is a struggle to survive and is full of challenging moments.

However, the story of these three incredible graduates is a testimony to the resilience of so many disabled people inside and outside the country. Perhaps they will inspire and touch the lives of other Somali disabled brothers and sisters out there and, hopefully, be a turning point for the non-disabled ones too. Perhaps their story will be a living example that disability is not inability. The one thing that is clear is that they are indeed a stirring example of courage and faith.


Ismael is planning to pursue his post-graduate studies in Kulalampur, Malaysia.


Abdirashid is trying to find a job so that he can support his family.

Farah is currently teacher at local school in his neighborhood and plans to marry soon to his long time fiancé.