Connecting millions to the lifeline 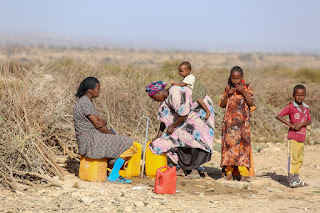 It was not until I travelled to Boroma and Tog Wajaale that I realized just how much I had taken for granted one of the most basic yet most valuable resources in life – water.
As a UNICEF Voices of Youth blogging intern, I had the privilege of travelling with a team from UNICEF and the European Union to see how their joint project on urban water delivery is coming along. The destination, Boroma and Tog Wajaale, are two of the biggest urban centres in Somaliland.

On our way to Borama, we passed small villages and made stops to talk to residents. One of them was a young boy who hadn’t washed himself for a week because there wasn’t enough water go around. He was covered in dust. Then there was a young girl, her small frame dwarfed by the jerrycan on her back. Also a mother, who spends 6 to 9 hours a day fetching water, carrying 30 to 40 liters of water on her head. When I asked one villager about her life, she said that all is well except for the “water shortage.”


But things are changing.


A new borehole in Afraag, an urban settlement about 12 km west Borama, has just been tested and once the pipes are installed it will be connected to the main town. This was where I met Ismail Farah, 13, a water vendor. As the eldest boy in his family, it’s his responsibility to support his family, even if it means that he has to give up his education.


“When the pipes reach our neighborhood, I will stop doing this,” he told me, standing next to his donkey cart that he uses for transporting water. “I will go to school. I will get to wear school uniform like other boys. I will carry books instead of jerrycans. And I will walk with my classmates instead of a donkey. It has always been my dream to wear uniform and carry books.”


In Tog Wajaale, I could feel the eagerness in the air. “The era of walking a long way to fetch water will soon be over,” said Nim’aan Abdi, a local resident. I was told that for the first time in the community’s history, piped water will be available thanks to the reservoir tank installed on the outskirts of the town. Pipelines are being installed as we speak and that will connect the tank with individual houses.


Nim’aan, 29, lives on the outskirts of Tog Wajaale and has 11 children. He has a good job and supports his family comfortably. But access to water was always a problem. “Before the borehole was drilled we had to get water from Botor, a small village 25 km away, using water trucks, and it was very expensive,” he said. “With this new water reservoir, we will get water at an affordable price. It is very challenging when you have something to eat but nothing to drink,” he added.


The impact of the project on women and girls is even more startling. For them, water has been long associated with danger, as Habiba, 29, a mother of three, explained to me. “Going into far places to get water is a risky business. You walk alone in the bush, starting from 6 in the morning, and come back around noon. You never know what will happen to you. Thanks to UNICEF, EU and our government, we can now access water in such short distance.”


This project is different in many ways compared to others that I have visited. It involves various stakeholders, including the government, water users’ associations and private contractors. All of them play a part in the management of water. You can feel that the ownership of the resource is in the hands of real people, people who have suffered for far too long and know exactly what to do to make things right – not just for themselves but for their children and grandchildren.


The goal of this project is to reach 525,000 people with safe drinking water in four towns in Somaliland – Borama, Tog Wajaale, Erigavo and Burao. From what I saw, it was only a matter of a month or two until the goal is fully met.


“We are very proud as a donor to see this remarkable achievement,” Mohamed Hajji, manager of this project at the EU told me. “Our ultimate goal is to enable local communities to have access to piped water - at an affordable price, for every household. In addition to supplying water to the town, this project will most definitely attract new arrivals - people will build new houses, and business will thrive.”


Perhaps the success here will inspire more such endeavors and benefit more people, and if more projects like this are undertaken, we will have a better chance at averting drought emergencies like the one we are experiencing now. These thoughts kept coming to my mind as I bid farewell to the UNICEF-EU team at the end of the two-day field visit, Philp and Bajwa from UNICEF, and Hajji from the EU. I knew they had worked very hard to get this far, but despite the success here in Somaliland, there is still so much to be done for the people. At the moment, around half of the population still don’t have safe drinking water at their disposal.