Taken Away From All of Us 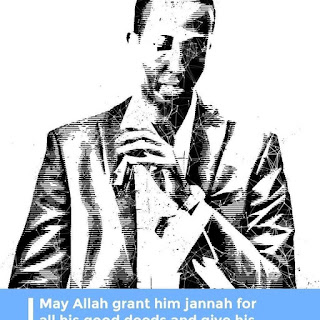 It took me almost four weeks to write short piece about the late brother Mohamed Mohamud Sheikh Ali’s shocking death because it was hard for me to process the fact that Mohamed had actually left this world so soon. But as a devout Muslim and believer of the Almighty’s written divine decree and the predestination I reconciled myself that Mohamed wasn’t the first and surely not the last one to leave this world.  And indeed “Every soul will taste death” Q:3:185.


Our Last Meeting
I met Mohamed (May Allah shower him with countless blessings) a day before he was killed at launching event of Dalsan TV in Mogadishu where we briefly discussed about some brilliant entrepreneurial ideas he was dreaming about. I remember the agro-business initiatives and how it can boost youth employment in Somalia was the center of our discussion. I was accompanied by three of my friends (Abdiwali Omar Ali, Mohamed Sudani Ali and Bashir Ibrahim). He knew three of us, so I introduced him to Bashir whom he just met for the first time. It would be the first and last time for my friend Bashir to meet Mohamed.


It was Thursday 2nd August next day around 8:30am local time, I was preparing myself for a big busy day, then I received three missed calls and one text message on my phone. The message read “Mohamed was shot”. I took Bajaaj and immediately rushed to the hospital where he was taken. Upon my arrival, I saw flocks of people including; family members, neighbors, friends and friends of his friends all mystified and asking questions. “He is at the ICU (Intensive Care Unit)” said one of them. “He needs blood” said another. “What is his blood group?” I asked “AB” they said. I wish his blood type matched mine which is O+, then immediately I called some friends who had similar blood group and asked them to come over to the hospital urgently. Fortunately, other donors donated the blood.


The sadden news I never wanted to hear
We waited for the results for two hours! those two hours were the longest hours in my entire life, waiting the medic team’s announcement felt like eternity to me. While we waited for the results, I tried to comfort Mama Zahra (Mohamed’s mother) and my surrogate mother but she was actually stronger than me at that moment. Two hours later after the surgery, Mohamed was declared dead! I wasn’t prepared to hear this news! Never!


I didn’t know what to do except saying and repeating what we were obliged as Muslims to say when someone passes away “Ina Lilah wa Ina Ileyh Raji’un” “We belong to the Almighty Allah and to him, we shall return”. I never cried on someone’s death before that day, not even my father’s though I was young when my father he passed away. Soon after the death news came out, I rushed to the ICU room and together with other volunteers we carried the body and moved to downstairs to put him on the ambulance. I wanted to get on the ambulance but I couldn’t move my legs because of the shock of seeing him dead. So i asked other volunteers to go with on the ambulance, someone hugged me at time even though I don’t remember who. And that was the last time I would be seeing Mohamed’s smiling face in this world.


Taken away from all of us
Several sleepless nights and stressful moments followed Mohamed’s death. All our dreams were shattered, our hopes for this country faded away. The passing of such promising young remarkable individual had affected and broke the heart of almost the entire youth in Mogadishu. Some of the colleagues gave up even though giving up is not an option. “They killed me the day they killed Mohamed” said one of the colleagues on twitter.  “They mercilessly took him away from us” said another.


Mohamed, a son of Somali air force commander and a former Somali Airline pilot Gen Mohamud Sheikh Ali, a son of iconic human rights champion and loving mother Mama Zahra Mohamed Ahmed, a brother of four beautiful sisters, a husband of a loving wife and a friend of all Somali youth was taken away from the ones he loved so much. He was taken away from the country he loved so much too.


Creating opportunities for others
During his short life, Mohamed achieved so many milestones, from founding the first post-civil war laundry and dry cleaning service to opening first florist shop to bringing and becoming the director of StartupGrind (a Google-sponsored global entrepreneurship platform) in Somalia.  His love for Somalia and its youth was unmatched, he empowered young entrepreneurs, startups, created opportunities for others, and stood as an advocate for youth employment in Somalia.


Mohamed was known as a man of multitasking and honest, today he is organizing startup grind event, tomorrow he is coordinating another platform. “Bring me someone who can do this job, I don’t care about his/her clan as long as they are competent” he said to me while he was looking for secretary. It is worth mentioning that none of all those employees working at the laundry shop he founded is related to him in any way. He preferred merit over nepotism and this was part of his job creation spirit for all.


An unforgettable philanthropist
Mohamed’s community work went beyond just business, part of his unforgettable welfare and benevolent work include building playgrounds and setting up library for an orphanage center in Mogadishu. On Eid occasions, he used to go, pray with the kids and spend good time with them. “For them, not to feel the loss of their parent, I have to come here every two weeks” he told me. His philanthropic work inspired these young orphans and created hope for them in their challenging time.


The sadden death of Mohamed was felt and mourned from this little orphan center and the streets of Mogadishu, to Nairobi, to Arusha, Dubai, London and the Silicon Valley which is Startup Grind’s global hub, Mohamed has made a national and international circle of friends and community through his “act local think global" strategy.


Prayers
May your soul rest in the highest heaven of all heavens, May Allah add you among the ones he is pleased with. O Allah, Mohamed is under your care and protection so protect him from the trial of the grave and torment of the Fire. Indeed you are faithful and truthful. Forgive and have mercy upon him, surely you are The Oft-Forgiving, The Most-Merciful. Amin


Fate did us apart but your living legacy will stay with us eternally by the grace of Allah.
at August 27, 2018