A TRIP TO THE LAST TIP OF THE CONTINENT 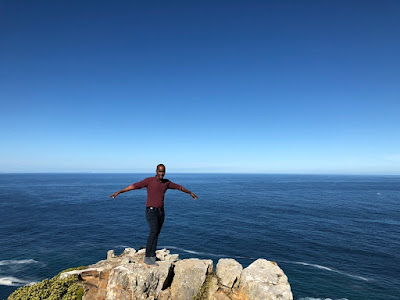 Traveling to South Africa was adventurous trip to a country I had no information other than the xenophobic stories i often see on media outlets. But my ten days stay in South Africa has changed my perception and gave me an utterly different image of the most beautiful country in the continent, a country that hosted most prestigious tournament in the world, the World Cup 2010!


Before departing from Jomo Kenyatta International Airport, Nairobi, I had to make sure I was booked with a window seat since my flight was departing around 5pm because i didn’t wanted to miss that awesome sunset over 35,000 ft above earth while heading to the last tip of the continent. Thanks to South African Airways who conveniently confirmed my window seat two days before my departure.
After flying close to four and half hours, the flight announcement said “Ladies and gentleman welcome to O.R Tambo International Airport.” I asked one of the South African passengers who was sitting next to me. “Excuse me, who is O.R Tambo?” because whenever I heard South Africa the only person that comes to my mind was Nelson Mandela and that was exactly what I expected.


My colleague told me that Oliver Reginald Tambo aka O.R was a renowned South African freedom fighter, ant-apartheid revolutionist and one of South Africa’s most vital founding fathers. The government named the airport after him in 2006 in a tribute of remembering his legacy and the notable role he played in the liberation of South Africa against the apartheid system. We landed at O.R Tambo International Airport Johannesburg and surprisingly I saw the Statute of the man himself at the international arrival’s terminal. To familiarize with this legend, I had to take a picture myself with his statute. “Nice to meet you Mr ORT” I said.
Johannesburg was not the only destination I wanted to visit in South Africa, so I spent the night in a guest house not very far from the airport to catch my next flight in the morning to Cape Town, the mother city as they call it.

In the next morning, I boarded another 2 hours flight from Joburg to Cape Town. One of my friends who knew I was traveling to South Africa said to me “If you don’t visit Cape Town you don’t see the beauty of South Africa.” Truly said indeed and of course I had other reasons to visit this city which I will mention later in the article. Cape Town was something else at least according to my own definition of beautiful landscapes, it was the best place I have ever visited.


I prodigiously enjoyed the fascinating landing view from the top of Cape Town, the white sandy beaches lapped by two Oceans, the landmark views of the exceptional mountains where you can see their peak above the clouds. That was astonishing and unforgettable experience. At this moment, before even landing, I realized that South Africa is a country of brilliant landscapes blessed with beauty natural scenery.


People I met in Cape Town.
Upon landing in CTIA, I was received by young strange man who, by the end of my days in Cape Town, will be my best friend and the most gracious Somali host I have ever met, Mohamed Hassan who reminded me the true Somali nomadic hospitality.
Another friend and legend I met was Abdiwahab H. Farah who was literary my eyes and ears in Cape Town, without him, I would be stuck in my hotel. Other amazing people I met include, Nasir Arale, Ayaanle, my childhood school teacher Hussein , my high school classmates Abdirahman, Saalim and of course my cousin Deqa Odawa.


However, one of the most important human i met in Cape Town was someone i waited and longed to meet for so long, my sister Naima whom I haven’t seen her for almost 11 years. Meeting her was super exciting and at the same time emotional. Even though my program was in Johannesburg the main reason I came to Cape Town was because of her. Naima is strong woman, a caring sister and surrogate mother who took care of me when I was young when mom was out of Somalia for quite number of years.

Then there was a bucket list nicely prepared and planned for me by my friend Abdiwahab as part of my four days visit in the city. On the first day, we started with the Victoria & Alfred (V&A) Waterfront, one of the most popular tourist attractive spots in Cape Town situated on the Atlantic shore at Table Bay Harbour . We enjoyed the spectacular water front view as we sipped our coffee. We then drove along the SeaFront road and again spent few minutes at the beach, here is where i saw a mesmerizing view of sunset over the Atlantic Ocean where the sun faded away slowly. The sky is clear, the moon is closer and the stars have already started shinning.


We then came at Syriana restaurant and because we were too much obsessed with Middle Eastern cuisine we had to eat something Kunaafa, a traditional Syrian/Palestinian dessert made with cheese pastry soaked in sugar. We didn’t knew about the ingredients but we enjoyed the taste anyway. One thing I liked about this restaurant is that all memories of Syria’s rich culture and heritage is exquisitely ornamented in its walls.


The second day was entirely dedicated to my sister, so I had good time full of memories and stories with my sister and her young daughter Sanaa.
On the third day, we hit the road again and visited Table Mountain, one of the most iconic landmarks in South Africa and the entire continent. One thing that surprises me was when you are driving in Cape Town you always see Table Mountain whenever you go in the city. I was told that the government banned building tall buildings just to ensure that locals and visitors enjoy seeing the mountain from every cover of the city. Our local tour guy told us that Table Mountain has become the single most welcoming icon to not only South Africans, but travelers from all over the world as well.


We took the cable car and headed the top peak, unfortunately because of the cloudy weather we were not able to see the breathtaking view of the Cape Town but at least being on top of this majestic mountain was another staggering experience itself. Not far from Table Mountain behind the Signal Hill, there lies a golden, glistening, jewel of a beach called Camps Bay Beach that outshines all other beaches I have ever seen in my life for its beauty, and its magnificent breathtaking view.


On fourth day we traveled by road heading to Cape Point located 60km southwest of Cape Town which is the last southwestern tip of the African continent surrounded by mountains and picturesque landforms. It this place where my eyes unexpectedly caught our blue colored white star flag. It was there I stood for a while to salute the waving flag.


Travelling to Pretoria
While I was in Cape Town, I received a sincere invitation from Somali Youth Association of South Africa in Pretoria. For some reason, I wanted to visit Pretoria and therefore this was a perfect time to explore another city in South Africa. Upon landing at OR Tambo International Airport again, I was picked up by my friends and we headed directly to Pretoria. Famous for its jacaranda trees Pretoria is a beautiful city and the current administrative capital city of South Africa. It is also home of University of South Africa, one of the oldest and largest academic institutions in Africa.


The team in Pretoria led by my friend Jirde Hussein organized a colorful welcoming dinner for me. We talked laughed and talked till midnight, most of them left Somalia 10 years ago, so I had to tell them all that happened since they left the country. In the morning, we went to the Union Building or the State House of South Africa where we took some pictures with Nelson Mandela’s famous statute. One thing I couldn’t believe was how easily we accessed the building because entering the state house of my own country is not as easy as this, you have to go through number of security checks but there I didn’t even see a single security guard. All I saw was tourists walking around, cameramen taking pictures and green open spaces.


Back to Johannesburg
I came back to Johannesburg where I had my program, i stayed three days  in a cosmopolitan area of Rosebank in the north central area of the city. I didn’t have enough time to enjoy and see the city because my schedule was tight. However, I made sure I visited the Apartheid Museum where The history of the apartheid system in South Africa is preserved and exhibited. The apartheid system was one of the world’s worst socio-political racial system against human beings in modern history. Later on, I was told that the word “apartheid” itself means "apartness" in the Afrikaans language.My friends also in Joburg also took me to Mall of Africa the largest single shopping mall to be built in Africa. For someone like me from East Africa, this was another mindboggling experience.


I truly enjoyed my time in South Africa and I had the best experience ever in my life, off all the countries I visited in Africa, the rainbow nation was the best for its hospitality, for its world-class infrastructure, for its spirit of PanAfricanism and most importantly for its gifted natural landscapes. I am looking forward to another epic trip to the last tip of the African Continent.