Youth can use culture to promote peace in Somalia 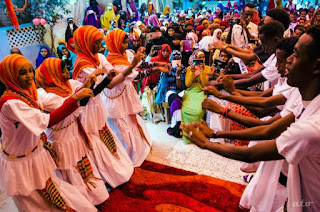 Youth are undeniably vital to the future of society and every nation's success, prosperity and stability depends on its youngsters. Unfortunately, Somali youth have been misused and misguided by their own clan elders and used to fuel Somalia’s elongated civil war that has taken lives of half million people over the last two and half decades. Their loyalty to the armed rebels and warlords is beyond measurable. They are committed and determined to fight in the name and for the honor of their clans/groups.

However, like other youth across the world, Somali youth have pivotal role of shaping the future of this country and making Somalia a flourishing and thriving nation. The question is how?

Youth can use culture to promote peace
Somalia’s once vibrant cultural landscape, which comprises both traditional and modern forms of expression in poetry, music, architecture, pottery and sculptures, has been devastated by more than twenty years of armed conflict and civil strife. Buildings and institutions of national cultural significance, such as theaters, museums and libraries, have been destroyed and are now in need of rehabilitation. As a result, a great deal of Somalia’s cultural memory has also been lost, a  situation worsened by the absence of cultural actors and the shortage of skilled professionals  able to manage cultural heritage and its institutions especially at very difficult time where culture is much needed to promote peace and stability in the country.
“I think we became blind when we lost our culture in all it is forms. Most youngsters today have no idea about what culture means to our society, what it means for peace and reconciliation,” says Shimaali Ahmed Shimaali, a singer and a former musician who performed various songs in the national theatre during the glorious days of Somalia before 1991. “Expressing our culture through its various forms is powerful way of educating society and promoting peace. And the young people today have a big role to play,” he added.
Culture as an expression of peace
Somali people use various forms of cultural expressions including poetry, oratory, theater, folklore dance and songs as well as art, all of which has not been used in the past two decades due to the armed conflicts. Somalia’s finest talented young men and women fled the country and moved to other parts of the world such as Europe, USA, Canada and Australia. Among them is the iconic Somali cartoonist and painter Amin Amir. Based in Canada, Amin uses his talent to show Somali people about the country’s political and social aspects through cartoons and painting published on his own website, which is accessed by millions of Somalis and non-Somalis around the world. Most singers, song writers, poets and athletes also escaped the country and emigrated abroad. A massive cultural brain drain
The local youth, however, especially those who lived inside Somalia never had the opportunity to present and showcase their talents which could have contributed a lot to Somalia’s road to recovery and stability. I personally believe that Somali youth can organize various social and cultural programs, including drama, poem contests as well as theatrical plays where the message of peace, brotherhood and coexistence can easily be conveyed to the public. In a society where skills of oratory and poetry are highly respected and valued, I believe literature and culture  are very powerful tools to promote peace which can contribute to the ongoing political peace building and transformation process.
Other useful social programs
I spoke to some youth members who told me about some wonderful ideas of what youth can do to promote peace and make Somalia a better place.
Mohamed Abdirhman, Hargeysa based University Student
“Somali youth can organize weekly theatre programs where they can perform drama and role plays. The audience will be invited and the programs will be aired through local TV and radio. I am sure it can send a great message to the public regarding our quest for peace. The fact that such platform is not in place right now makes people less aware of what peace means to them. It is only politicians and other high profile figures who are now talking about peace at national and international level but we need a bottom-up approach; a grass root campaign.”
Ahmed Abdirahman, Mogadishu based youth Activist
“We need to have a different platform, like a Somali Got Talent Show where the most talented individuals are brought together and perform their shows and the concept of peace is mainstreamed in these programs. I am a big fan of talent shows and I believe such programs can transform Somalia’s conflicted mentalities into very peaceful coexisting society that can love, laugh and live together.”
Nasra Osman Bihi, Kismayo based civil society activist
“Somali youth can focus on social programs such as organizing a book fair events. The recent book fair events played a notable role in bringing together Somalia’s talented authors, writers, artists, poets as well as culturists in which the successfully impact was widely witnessed by everyone. I believe with books and pens we can transform Somalia into peaceful country.”

It stands to reason that the young generation occupies a special place in our society. They constitutes a representative of the future in the broadest sense; the future of any society depends on the practical and spiritual molding of its youth. Evidently everyone in this country young and old ha s role to play and can contribute to his/her society; a society that has been suffering for long period of time. Youth, however, have the most important role to save the country and make sure Somalia stands on its feet and regain its lost glory. From volunteering to community works to trauma healing, forgiveness and reconciliation programs, youth can be agents of change.


Abdifath Hassan Ali  is a social activist and blogger based in Mogadihsu. He can be reached at abdifatah2020@gmail.com
at December 12, 2016